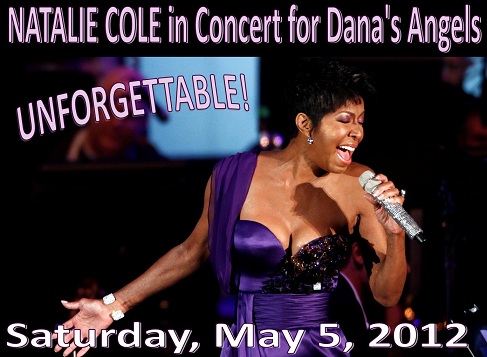 We are excited to announce that on Saturday, May 5, 2012, at the Palace Theatre in Stamford, CT, 9-time GRAMMY® AWARD winner NATALIE COLE will perform a concert to benefit DART! Natalie Cole rocketed to stardom in 1975 with her debut album, Inseparable, earning her a #1 single, “This Will Be (An Everlasting Love)” and two Grammy® awards for Best New Artist, as well as Best Female R&B Vocal Performance. More hit singles followed, including “Sophisticated Lady (She’s A Different Lady),” “I’ve Got Love on My Mind,” “Someone That I Used to Love,” “I Live For Your Love” and a remake of Bruce Springsteen’s “Pink Cadillac.”

In 1991 Natalie Cole took a bold leap that would change her life and career forever. Already a highly successful R&B artist, she amazed everyone when she recorded Unforgettable…With Love, an album of standards from the American Songbook that included a duet with her late father—Nat King Cole—on the title track. The album spent five weeks at #1 on the pop charts, earned six Grammy® awards (including Song, Record and Album of the Year) and sold more than 14 million copies worldwide. As an award winning singer, songwriter and performer Natalie Cole has proven to be one of the most beloved musical artists of all time.

Like DART’s previous galas, this year’s event will start with an elegant wine and hors d’oeuvres reception, a pasta bar by World-Famous RAO’s Italian Resturant, silent and live auctions. Our gala will also be themed to help celebrate Cinco de Mayo!

Watch Natalie Cole perform “This Will Be (An Everlasting Night)”