On September 24th, 2016, Global Genes®, one of the leading rare disease patient advocacy organizations in the world, recognized Dana’s Angels Research Trust along with DART’s funding collaborators in Support of Accelerated Research for Niemann-Pick type C Disease, or SOAR-NPC; the Hide and Seek Foundation, the Race for Adam Foundation, Hadley Hope Fund and Fight NPC, and SOAR-NPC’s research collaborators, Dr. Daniel Ory of Washington University, Dr. Steven Walkley of Albert Einstein College of Medicine, Dr. Charles Vite of the University of Pennsylvania and Dr. Cristin Davidson of the NIH, for their outstanding work in collaborative science. 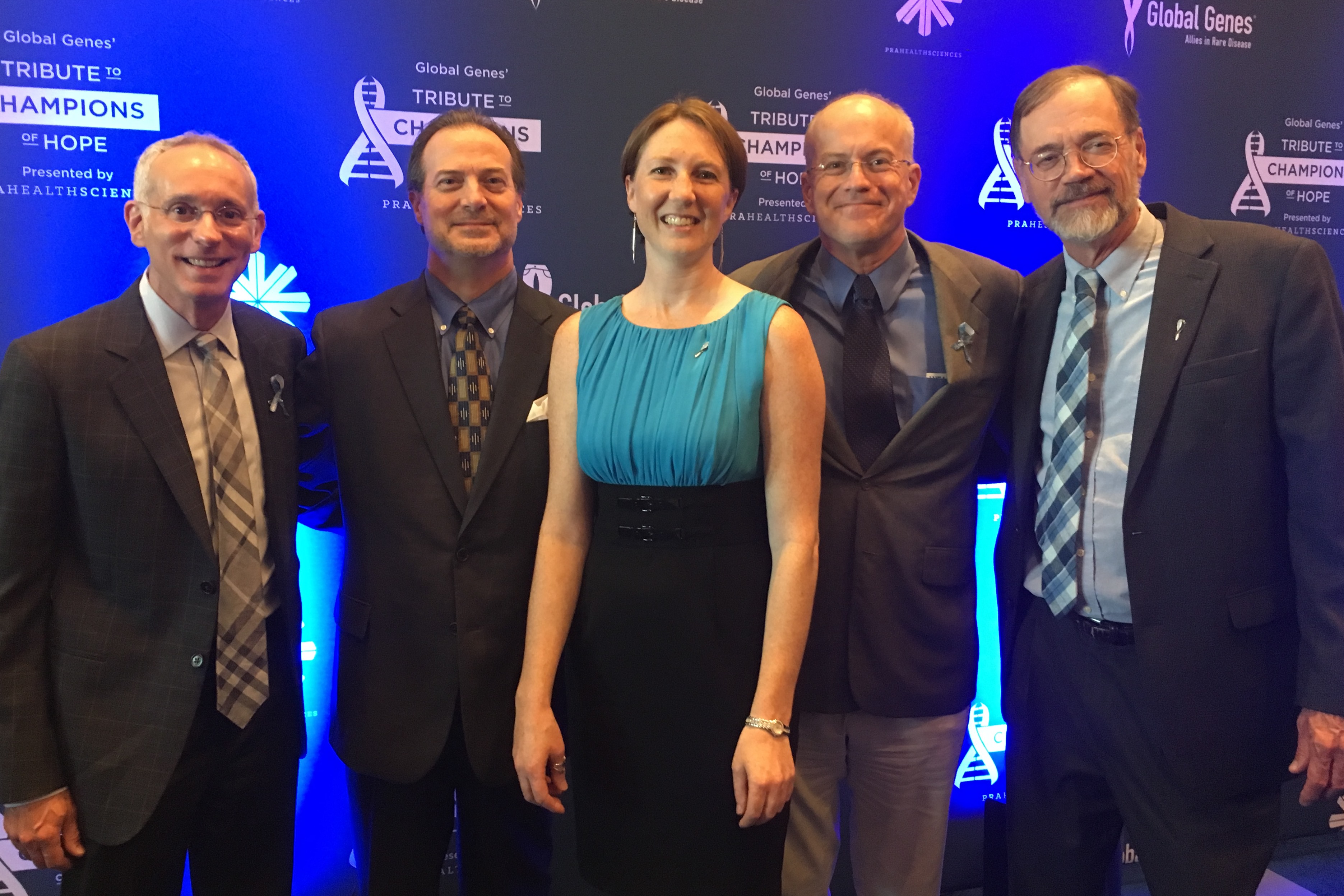 Dr. Dan Ory of Washington University, Phil Marella of DART, Dr. Cristin Davidson of the NIH, Dr. Charles Vite of the University of Pennsylvania and Dr. Steve Walkley of Albert Einstein College of Medicine at the Global Genes Gala.

The annual RARE Tribute to Champions of Hope Gala, presented rare disease champions from around the globe that are proving that great things can be accomplished by dreaming, planning, taking action, and believing. The purpose of the RARE Tribute to Champions of Hope Awards is to recognize those who are uniquely attacking the challenges they face in the fight against rare disease; those who are thinking outside of the box and working tirelessly, not focusing on what was, but setting their sights on what can/will be. Over 350 individuals and organizations worldwide were nominated by their peers for the award. From the extraordinary list of nominees, members from the Global Genes Board of Directors, Medical and Science Advisory Board, and other key partners selected the recipients to be honored at the 5th Annual Tribute events.

DART is particularly proud of its commitment as a founding member of SOAR-NPC.  Support of Accelerated Research for Niemann-Pick type C disease or SOAR-NPC is a collaboration created by parents and scientists as a grassroots response to the absence of treatments for NPC. SOAR–NPC is innovative in the openness with which scientists share data with supporting family foundations for a mutually beneficial relationship. The SOAR-NPC scientific collaborative is comprised of investigators from leading institutions where NPC research is conducted and works closely with the National Institutes of Health and other organizations to leverage research investments. By focusing on compounds that do not need new discovery efforts, SOAR-NPC has helped shepherd a trial to test a treatment that could slow the progression of NPC. That trial now has a commercial biotech company sponsor, Vtesse, Inc.